Niger, officially known as the Republic of Niger (French: République du Niger), is a large country located in West Africa.

As with the other Saharan countries, the country is sparsely populated compared to its size, as a large chunk of its territory (namely, the north) is arid desert that is rich in mineral resources but utterly unsuitable for a living. The country's middle portion is the extensive Sahelian savanna and is only a little bit livelier than the north, with the population being nomads. Instead, most of the settled population is concentrated in the southern Sudanian Savanna bordering Benin, Burkina Faso, and Nigeria, where precipitation is substantial and the land is cultivable.

The population of Niger is diverse. The Sahara and Sahel are mainly occupied by the Tuareg Berbers, who practice a nomadic lifestyle centered around the trade of salt and copper. The eastern Lake Chad region has a history of being ruled by Chadian states and is ethnically Kanuri. The border with Nigeria is part of Hausaland inhabited by Hausa, who used to rule a caliphate located in southern Niger and northern Nigeria in the 19th century. Finally, the western region, centered around the Niger River and including the capital Niamey is home to various Songhai tribes, who once ruled a vast empire stretching throughout West Africa from the 15th to 16th centuries. The largest single ethnic group in Niger is the Hausa, but the Songhai historically have a major say in the country's politics. The only thing that unifies these disjointed ethnic groups is their traditional adherence to Islam.

France entered the region in the late 19th century and subjugated Niger in the early 20th century. For a while, it was relegated under the administration of colonies in the west, as much of the territory was out of reach. Even after it became a proper colony in 1922, the northern region was under military rule until after World War II.

Niger became independent in 1960. Unfortunately, the country's politics have been consistently tumultuous after that. The first president, Hamani Diori, was a dictator who ruled for 14 years. He was deposed in a coup by the military, who proceeded to reign with an iron fist for the next 19 years. The first multiparty election was held in 1993, but the damage had been done; a Tuareg rebellion occurred between 1990 and 1995, partly due to the repression, partly because the Tuareg, like the rest of the non-upper class population, did not share in the prosperity of their land's uranium mines. Peace was eventually achieved and the government vowed to become more inclusive, but it was shaky and did not address the injustices.

Just a year after the end of the Tuareg rebellion, a coup deposed the democratically-elected president, with the military rule ending in 1999. The aforementioned unaddressed injustices brought a second Tuareg rebellion from 2005 to 2007. Niger experienced another coup in 2010, although this was contentious rather than condemned, as it followed a constitutional crisis that saw the incumbent president, Mamadou Tandja, attempting to modify the constitution so he could seek a third term. A year later, the country returned to civilian rule with the election of Mahamadou Issoufou as president. In 2015, Niger was embroiled in the Boko Haram insurgency from Nigeria and experienced attacks around the Lake Chad region. A multinational task force was able to strike a major blow to the organization, but occasional low-level attacks continue to pose a problem in the southeast.

Niger mainly exports mineral riches, particularly uranium, whose mines in the Sahara are exploited by French companies. The country's population mostly depend on subsistence agriculture and are extremely poor. According to the United Nations, it has among the lowest GDP per capita and the lowest HDI in the world. The country also has a huge problem in the healthcare sector, including an extremely high fertility rate (7.6 children/woman) and high infant and adult mortality rates. The average life expectancy for both sexes is 62 years old, compared to the United States where it is 78 years old.

The country's name, as with Nigeria, is derived from the Niger River, which runs along the western region. As it was colonized by France, Niger is actually pronounced "Nee-Jher", not "Nye-Jer", and Niger's citizens are referred to as Nigeriens, pronounced as "Nee-Jher-Ee-eins" ("Nigerians" on the other hand refer to citizens of Nigeria). Oh, and it is always, always spelled with just one G. MSNBC found that out the hard way

.note Technically, it was a person's name (Niger Innis) in that instance, but it applies just as much to the country. In fact, the river's name has nothing to do with the ethnic slur, which is derived from Latin niger, meaning "black". Instead, it is believed to come from ger-n-ger, Tuareg for "river of rivers". 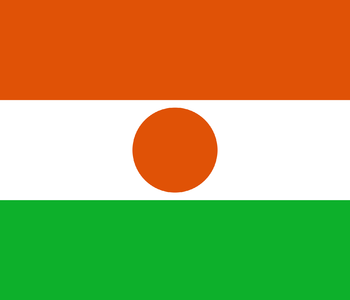 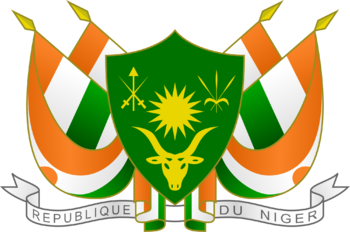 Throughout great powerful Niger
Which makes nature more beautiful,
Let us be proud and grateful
For our newfound freedom!
Let us avoid vain quarrels
In order to spare ourselves bloodshed,
And may the glorious voices
Of our race be free of domination!
Let us rise in a single leap
As high as the dazzling sky,
Where stands guard its eternal soul
Which will make the country greater!
Arise! Niger! Arise!
May our fruitful labors
Rejuvenate the heart of this old continent!
And may the song be heard
In the four corners of the Earth
As the cry of a fair and valiant people!
Arise! Niger! Arise!
On the ground and on the wave,
To the sound of the drums
In their growing rhythms
Let us always remain united,
And may each one respond
To this noble future
Which tells us: Go forward!
Government Miscellaneous