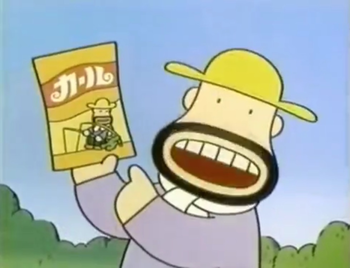 Karl Ojisan is the mascot of a brand of cheese flavored corn puffs called Karl, made by Japanese snack company Meiji. While the puffs themselves have been around since 1968, Karl Ojisan made his debut in 1974 and stars in a series of animated ads for the product. Besides Karl Ojisan himself, the commercials often contain his nephew and a band of woodland critters.