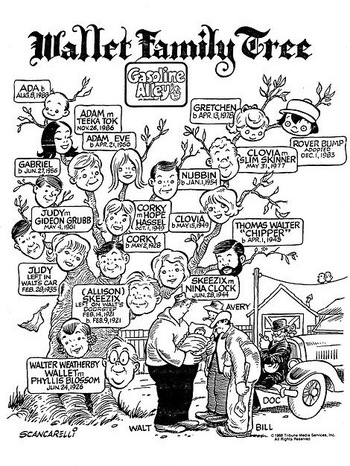 Gasoline Alley is an American Newspaper Comic strip created by Frank King, currently distributed by Tribune Media Services. First published on November 24, 1918 and beginning as a Sunday panel before becoming a daily strip in 1919, it is the second-longest-running comic strip in the U.S. and has received many critical accolades for its influential innovations. Along with his inventive concepts in color and page layout, King introduced real-time continuity to comic strips by showing his characters as they grew to maturity and aged over generations.

The strip originally depicted young garage owner Walt Wallet and his friends in automobile-related situations (hence the title), but in 1921 it began to chronicle Walt's home life after he found an abandoned baby on his doorstep, whom he adopted and named "Skeezix" (common slang at the time for a motherless calf). Five years later Walt married Phyllis Blossom, with whom he had a son named Corky. The family was completed in 1935 when a baby called Judy was left in Walt's car. All three grew up, got married and had children of their own. In later years, the strip has mostly centered around Skeezix and his wife Nina Clock, as well as on their daughter Clovia and her husband Slim Skinner, who now manages the garage. Garbage collectors Joel and Rufus stand out among the non-Wallet characters.

Frank King was the original artist, and was replaced by Bill Perry in 1951 (Sundays) and Dick Moores in 1959 (dailies) after both had assisted King for years. In 1975 Moores became the sole artist. Jim Scancarelli took over in 1986 after Moores' death and has drawn the strip ever since.

Not to be confused with the Rod Stewart album/song of the same name.

This Comic Strip contains examples of: