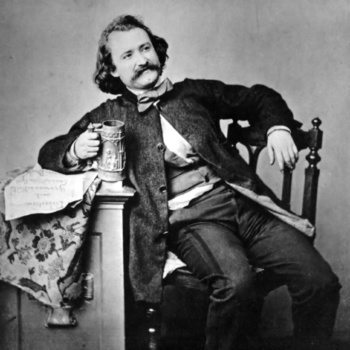 Heinrich Christian Wilhelm Busch (15 April 1832 – 9 January 1908) was a 19th century German painter and poet, who became famous for his (black and white) picture stories, done as wood engraving or zincography. with rhymed texts (mostly four-trochees). He's still widely known today, especially for his children's stories, like Max and Moritz, the success of which has made him one of the most-quoted poets in the German language right next to Johann Wolfgang von Goethe and Schiller. He's not however the author of Der Struwwelpeter, which is yet a bit older, although from the 19th century too.

Due to the lack of Speech Bubbles not really Comics yet, but definitely Sequential Art. Influenced The Katzenjammer Kids by Rudolph Dirks and found many other imitators.

are many to find):

Works by Wilhelm Busch with their own page include:

Other works by Wilhelm Busch contain examples of: