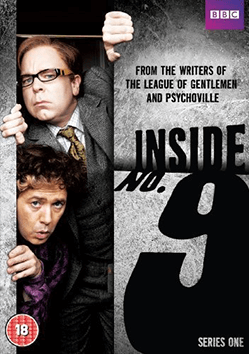 Inside No. 9 is a British half-hour Anthology television series, first broadcast by the BBC in February 2014. Most episodes are some degree of Black Comedy, but the series occasionally plays with other genres, from straight drama to supernatural horror to Lighter and Softer farce. It was created and is written by Reece Shearsmith and Steve Pemberton (the two members of The League of Gentlemen who had previously created Psychoville), and every episode's cast includes one or both of them.

Each episode uses a different single location as the primary setting, each of which has the address "No. 9". Locations include a gothic mansion, the sleeping car of a train, a cubicle in a call centre, an art gallery, a karaoke booth, a hotel corridor, a theatre changing room, and a police car.

Has Recap Pages for each episode.

The online mini-episode "The Inventors" provides examples of: