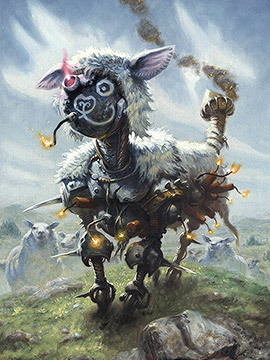 In Real Life, sheep generally do not spontaneously combust, and if they did it would probably be a serious matter. This does not stop video games and other media from featuring exploding sheep for absurd comedy, because there's just something inherently silly about the idea having those placid woolly ruminants explode with a loud cry of "baa!". It's so prevalent that The Other Wiki used to have an article about it. Of course, different species, barnyard or otherwise, have been shown to explode as well, but for some reason, writers and designers just like their exploding sheep.

Not to be confused with Bob-omb. See also Action Bomb.