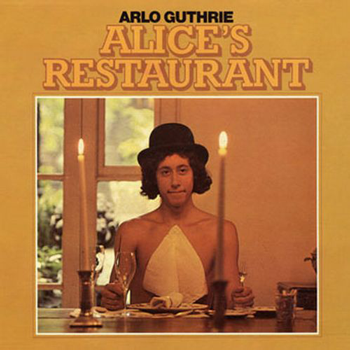 "Now, it all started two Thanksgivings ago..."
"Walk right in, it's around the back
Just a half a mile from the railroad track
You can get anything you want at Alice's restaurantnote excepting Alice"
Advertisement:

The song is talking-blues-style with a sung refrainnote The refrain, confusingly, is introduced with the words, "This song is called Alice's Restaurant".... It's a recounting of a long-winded and exaggerated but basically true story of a young Arlo's experience one Thanksgiving. Arlo tried to do a simple favor for his friend Alice by taking her garbage to the dump, but since it was Thanksgiving Day, the dump was closed. He threw the garbage over a cliff instead after finding another pile of garbage had already been thrown down, only to be arrested and fined for littering by the trigger-happy policeman Officer Obie in the small town where it happened. His punishment was ultimately determined to be a fifty dollar fine and picking up the garbage he threw down the cliff. Later in life, Arlo ended up being judged "morally unfit" to fight in the The Vietnam War by the United States military because of this littering charge. Arlo points out the absurdity that a person with a conviction for a harmless crime is considered morally unfit to "burn women, kids, houses and villages", and ends it with an anti-war message. Or maybe a pro-common-sense message.

There is a long-standing tradition of classic rock radio stations playing the song on Thanksgiving Day, because the littering incident takes place on that holiday (and, originally, because the song is so long that it gave the DJ on duty time to slip off and gobble down some food).

The song was originally intended to be one of a series (none actually titled "Alice's Restaurant"), but apart from follow-ups to the Massacree — of which there have been several, including one reporting that Richard Nixon is said to have owned a copy of the original album and noting the coincidence that the famous missing section of the Watergate tapes is also 18 minutes long — there has only been one released, the even longer "Alice's Restaurant: Before Time Began" (aka, depending on the album, "The Alice's Restaurant Multi-Colored Rainbow Roach Affair").

A 1969 film, also called Alice's Restaurant, was based on the song. Not to be confused with 1969's "Alice's Rock & Roll Restaurant", which is basically "The Alice's Restaurant Massacree" without the talking-blues about the garbage, arrest, etc. It's also not Alice Doesn't Live Here Anymore which had a Spinoff Alice — though the title character works in a restaurant.

He said "Kid, we found your name on an envelope at the bottom of a half a ton of tropes...":

(After the Audience Participation Failure.) "That was horrible. If you want to end war and stuff, you got to sing loud."