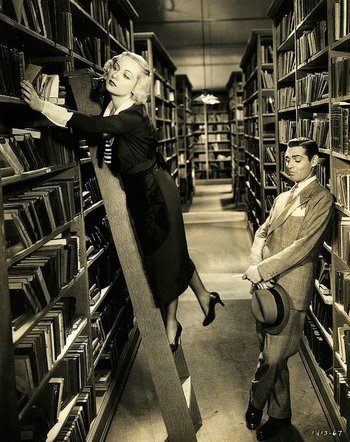 Checking out some, er... books.
Advertisement:

No Man of Her Own (1932) is a pre-Code comedy-drama film directed by Wesley Ruggles, starring Clark Gable and Carole Lombard.

The film begins with card shark Jerry “Babe” Stewart (Gable) hiding for awhile from the law. He goes to the small town of Glendale where he meets sassy librarian Connie (Lombard). Babe just wants a quick fling, but due to the flip of a coin, they get married. Problems arise because Connie has no idea about Babe’s criminal past, and he refuses to let her know.

(Very) loosely based on the Val Lewton novel No Bed of Her Own, this film is notable as the only on-screen pairing of Gable and Lombard, who belonged to different studios (Metro-Goldwyn-Mayer and Paramount, respectively) and never worked together again even after becoming one of Hollywood’s most famous couples. Lombard wasn't the first choice to play Connie: Miriam Hopkins was slated to play the part, but after she refused to give Gable top billing the part went to Lombard. It's one of the few pre-Code films she had a starring role in before her breakthrough in Twentieth Century.

Not to be confused with the 1950 film noir of the same name starring Barbara Stanwyck.

No Man of Her Own demonstrates the following tropes: