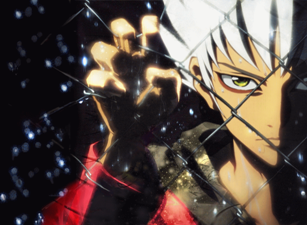 I will go on living.
Advertisement:

In the suffocating city of Calm, 15-year-old Zed dreams of freedom and breaks down doors in his spare time. Wishing to escape from his harsh surroundings, he follows a mysterious gust of wind through a portal to a different world, a world of magic being torn apart by war. Arriving in the peaceful land of Templar, he meets a girl named Roya who is a Shard Caster; a warrior who uses the power of Shards to cast spells and summon Spirits. Zed learns that he too has become a Caster, and decides to fight in order to get stronger and find some meaning in his life. Little does he know that his sickly friend Noah has also been transported and developed powers of his own. They quickly become embroiled in events far beyond their control, with the fate of their new world at stake.

A 2006 anime by Madhouse, Kiba is a dark and often bleak show that concentrates on the characters' growth and survival in times of hardship and injustice, and the search for what it means to be truly free (though still with a healthy dose of action). Despite the fantasy elements, it's definitely not to be taken lightly.