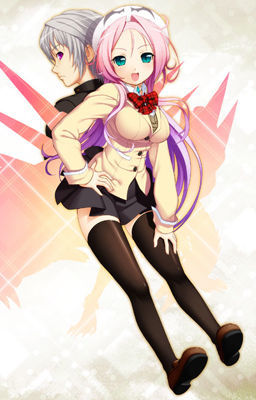 Dra+Koi is a very short visual novel by nitro+, written by Jin Haganeya and illustrated by Tsuji Santa, about a dragon that attacks a city, gets knocked down by a mysterious dragonslayer and turns herself into a human in order to recover. She comes across the hero of the story and attempts to eat him, but he fends her off and escapes homeward. The next day, she transfers into his class and declares her love for him, chases him down and forces him into a relationship.

Dra+Koi is a visual novel with a very silly atmosphere (most of the time) and an odd fondness for metafiction. The cast is very small, the story is short and is at least as interested in talking about stories as it is about the characters, all of whom go unnamed.