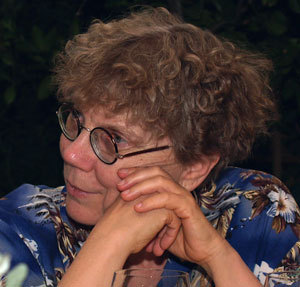 Barbara Hambly (born August 28, 1951) is an American SF and mystery writer. Her works include several otherworld fantasy series, a historical fantasy series with vampires, and a series of historical mysteries.
Advertisement:

On the Sliding Scale of Idealism Versus Cynicism, her works tend to be a ways off from the Idealistic end. The heroes are good people, but realistically complex and possessed of human imperfections, and they often face large and complicated problems that can't be solved simply by smiting monsters. And when it comes to monsters, the fanged squamous horrors are often given a run for their money by some of the human beings.

Two good starting points for Hambly are Bride of the Rat God, in which an actress in 1920s Hollywood becomes the unwitting target of an ancient Chinese curse, and Stranger at the Wedding (aka Sorcerer's Ward), a mixture of Regency romance and murder mystery with the added twist that the protagonist has foreseen the murder magically and is trying to solve it before it happens. Both are standalone novels, and feature smaller-scale problems that admit of relatively neat happy endings, but are still sufficiently characteristic to give you an idea of whether this is the kind of thing you like.

In addition to her self-originated work she has written three Star Trek Expanded Universe novels (Ishmael, Ghost-Walker and Crossroad), two Star Wars Expanded Universe novels (the first and third books in The Callista Trilogy), and two tie-in novels for the Beauty and the Beast TV series, as well as episodes of Jayce and the Wheeled Warriors, M.A.S.K., She-Ra: Princess of Power and Centurions. She also collaborated on the first Magic Time novel with the franchise's creator, Marc Scott Zicree.

Works by Barbara Hambly with their own trope pages include:

Barbara Hambly's other works include examples of: