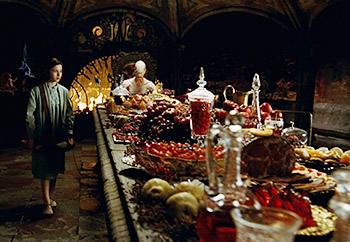 A blood-red banquet in the lair of a child-eating monster, who sits immobile at the end of the table? Well, okay, maybe just a quick bite.
Advertisement:

Time and again while wandering deep through Mordor, the heroes come upon a strangely well-appointed city/mansion/hotel/derelict/etcetera with nobody there. They will often discover an elaborate banquet laid out on a table, saunas to bathe in, clothing to dress in, and rooms to sleep in. Without any curiosity as to what it is and who owns it — or the slightest bit of hesitation — our heroes will then spend the night there like the original "Goldilocks". (While it often does turn out to be a booby trap set by the villain, if it isn't, the heroes will leave the next day and think absolutely nothing of it.)

See also Food Chains, Eldritch Location, Exploring the Evil Lair, No, Mr. Bond, I Expect You to Dine. If the hero tarries a really long time, compare Year Outside, Hour Inside. If the actual owner is on his (or its) way home, compare Curiosity Killed the Cast.