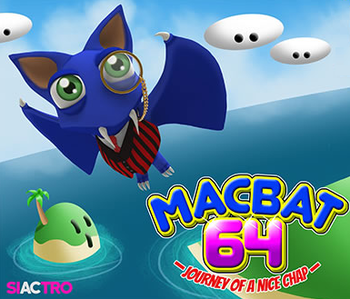 Macbat 64: Journey of a Nice Chap is a 3D Retraux Platform Game by Siactro. It was released for PC through Steam on March 17, 2017, with a Nintendo Switch port in 2020. It's the sequel to a brief freeware game known as Kiwi 64.
Advertisement:

The game follows Macbat, a sophisticated bat, and his short journeys through various lands... yeah, that's all there is to it.

Of course, the real reason this game exists is as a love letter to old late 90s-era Nintendo 64 3D platformers like Banjo-Kazooie, and it certainly reflects in its presentation, featuring a bunch of wacky characters, plenty of platforming, and even graphics reminiscent of games right off the N64.

Macbat would later appear as an unlockable secret character in Toree 3D, another game by Siactro.