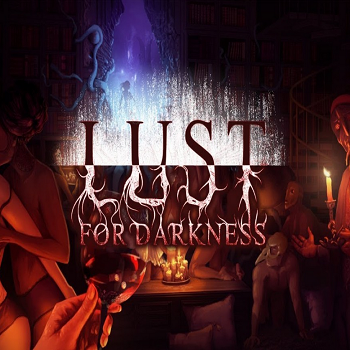 Lust for Darkness is a horror/adventure created by Movie Games Lunarium and published by Movie Games S.A and PlayWay S.A., released on PC in 2018 and on Nintendo Switch in 2019.
Advertisement:

One year ago, Jonathan Moon's wife Amanda mysteriously disappeared. One evening, Jonathan receives a strange letter sent by Amanda herself, revealing where she's held and that she left some clues and objects to help Jonathan rescue her. Now, Jonathan must sneak inside the creepy Yelverton estate, which is the headquarter of a apocalyptic sex cult, which is then revealed to be related to another dimension...

The game is played in first-person, with puzzles and stealth sequences (Jonathan can't fight and must avoid or flee enemies). It is also notorious for being very sexually explicit.

Has a sequel, Lust from Beyond.