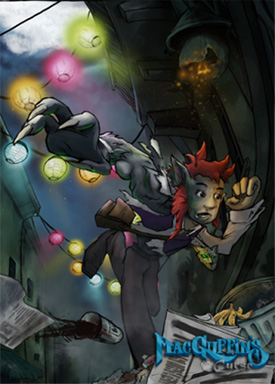 MacGuffin's Curse is a game developed by Brawsome and released in 2012 for PC and IOS.

The story seems simple at first: Lucas, a former magician, is hired to steal an amulet from a museum. What happens next sets off a series of events that are as hysterical as they are convoluted. Once Lucas puts on the amulet, he can shapeshift from human form to wolf form in the moonlight. In order to progress the plot, the player must switch between werewolf and human in order to solve block puzzles. The werewolf is strong but can't open safes; the human can fit through windows but not smash walls. As the story moves along, Lucas uncovers more incriminating evidence against Alphonse Connell, the resident corrupt jerkass with a personal grudge against him. He also discovers one more important thing: he can't take off the amulet.

There are lots of hilarious gags and descriptions to keep you going, in true adventure story tradition. As the player completes each puzzle, he is rewarded with commentary about that room from the developers. Comics found in safes sprinkled along the way give clues to the backstory.

You can download the demo and purchase the game here