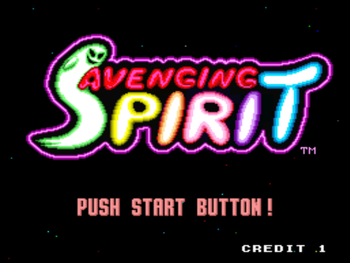 Avenging Spirit, or Phantasm (ファンタズム) as it is known in Japan, is a 1991 Platform Game by Jaleco.

Our hero is out strolling with his girlfriend one day, until a group of thugs in trenchcoats attack them. They kidnap the girlfriend and take her away, but not before pulling out a gun and shooting him dead. A tragic way to go. It looks like it's all over for our hero.

The girlfriend's father, who is a famed paranormal scientist, resurrects your ghost and informs you of what really happened. The thugs that killed the hero and kidnapped his daughter were agents working for a secret criminal organization and are holding your girlfriend for ransom in order to get her father's scientific secrets on ghost energy. It's up to you, as a ghost, to infiltrate the villains' headquarters and rescue her and put a stop to their plans.

Avenging Spirit is a 2D platformer with a twist. Your character isn't really playable, as he is a ghost. The idea of the game is to use your ghostly possession powers to take control of enemies and make them do your dirty work instead. Each of the enemy characters have their own powers and attributes. Some move fast, some can jump higher, and others have useful projectiles. If your character runs out of health and dies, you go back to being a ghost, but don't take this as invincibility, as your ghost energy runs out gradually until you possess another body.

The game was also released for the Game Boy in 1992.

See also Geist, a similar game about controlling a ghost.