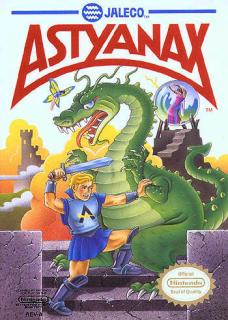 Astyanax (released as The Lord of King in Japan) was a side-scrolling action game released by Jaleco for the arcades and the Nintendo Entertainment System. It is not a game about Greek mythology.
Advertisement:

High school freshman Astyanax (named after the hero of Greek mythology, "he thinks", although otherwise not related to his namesakenote who died at a very young age) keeps having visions of a girl. Walking to school one day, he finds himself teleported to another world by a fairy named Cutie. Cutie is the advisor of Princess Rosebud, ruler of the kingdom of Remlia. Unfortunately, Rosebud has been kidnapped by the evil wizard Blackhorn. It seems Astyanax is The Chosen One, as he possesses "The miracle power within him", and so it becomes his job, with the help of Cutie and a magic ax called "Bash", to save Rosebud and restore peace to Remlia.

Tropes common to both games:

Tropes exclusive to the arcade game:

Tropes exclusive to the NES game: