Video Game / Princess Remedy In a World of Hurt 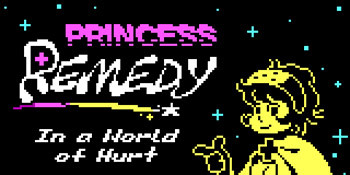 Developed by Ludosity for the Games Against Ebola game jam, Princess Remedy In a World of Hurt is a simple pixel game in which the player takes on the role of Princess Remedy, a graduate from the Saturnian healing school. The game was created by Daniel Remar and Anton (Regnslöja)

with music by Mattias and Stefen, and took a total of four days to make. It has since been released for free on Steam and can be found here

In Slap City, Princess Remedy is avaiable as a playable character.