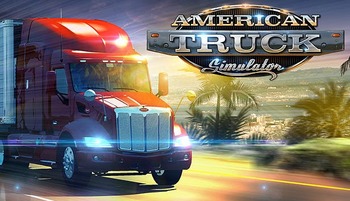 Experience legendary American trucks and deliver various cargoes across sunny California, sandy Nevada, and the Grand Canyon State of Arizona.
Sequel to the popular Euro Truck Simulator series, In America! In addition to the change in scenery and the lineup of American conventional trucks, several new mechanics are introduced, such as patrolling police cars, weigh stations, and more.

Tropes present in the game include: