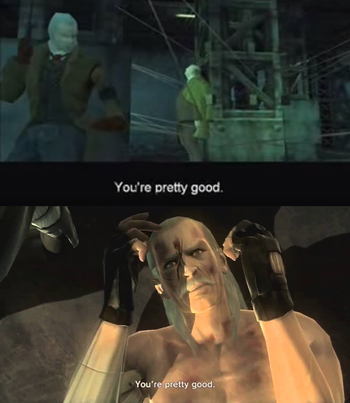 A lot of characters have a phrase in media that they are known for saying. They no doubt say it almost all the time. People know these characters by this phrase, and they are aware. So how do these character make sure that people will forever think of them when hearing their catchphrases? They have said phrase be the last thing they say before they die.

When a character's Famous Last Words ends up being the very thing they have been known to say, it often hits those who cared very hard to the point where they actually start thinking of them when they hear it from somebody else. It's also possible that another character will pick up said phrase as a means to remember them by and ensure that their phrase can live on.

On the other hand, if it is a villain delivering their catchphrase in an attempted Pre-Mortem One-Liner only to be killed upon saying it, expect characters to either see killing them as a way of shutting them up or see their last words as ironic. Alternatively, the villain may be attempting a Taking You with Me when they say their phrase.

May sometimes overlap with Killed Mid-Sentence. If it overlaps with Dying Vocal Change, it's also an Alternate Catchphrase Inflection.

As this is a Death Trope, spoilers will not be marked.