Film / Missile to the Moon 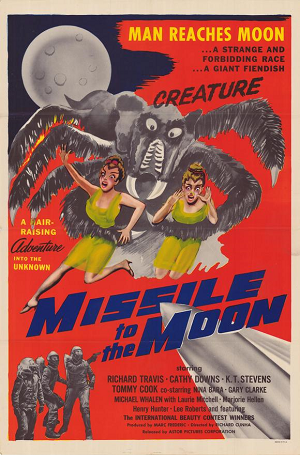 "Missile to the Moon is best remembered for the Most Outstanding Performance...by a slab of granite."
— John Candy, It Came from Hollywood
Advertisement:

Missile to the Moon is a 1959 American science fiction film directed by Richard E. Cunha, and starring Richard Travis, Cathy Downs and K. T. Stevens. It is a remake of Jack Rabin and Al Zimbalist's 1953 film Cat Women of the Moon.

Tropes to the Moon: