Film / Middle of the Night 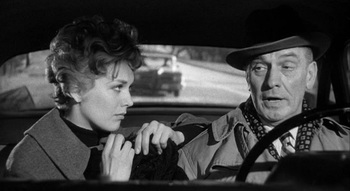 Middle of the Night is a 1959 American drama film directed by Delbert Mann, starring Fredric March and Kim Novak. Screenwriter Paddy Chayefsky adapted his own hit Broadway play (which began as a 1954 television play).

Jerry Kingsley (March) is a widower in his mid-fifties. Jerry is well-to-do, owning his own garment business, which counts among its employees young Betty Prentiss (Novak). Jerry is lonely, two years having passed since his wife's death; in an early scene he calls up a woman he went out with some time ago only to find out she's gotten married again. Betty is lonely as well, her unhappy marriage having ended in divorce after her husband George left for a job in Las Vegas.

Jerry and Betty know each other only as work acquaintances, but one night when Jerry stops by Betty's apartment to pick up some documents, he finds her in emotional distress. Betty pours out her heart to her solicitous boss, telling Jerry that she's upset because her husband wants to come back and get back together. Jerry offers sympathy, and they bond. Soon they fall in love—much to the disgust of Jerry's daughter Lillian, who is actually a year older than Betty, and Jerry's sister Evelyn, who has assumed a sort of platonic wifely role in Jerry's life.

Martin Balsam appears as Jerry's son-in-law, Jack. One of only two movies Lee Grant (Betty's friend Marilyn) made between 1951 and 1963, as she had been put on The Hollywood Blacklist for refusing to testify against her husband for the HUAC.