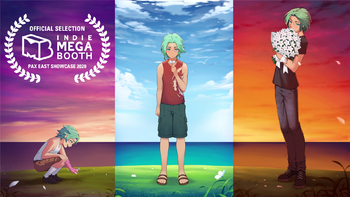 "A twenty-dollar bill, four summers, fifteen years, and a one of a kind life."
— Itch.io Page

Eight-year-old Jamie Last (name changeable) is a resident of the sleepy seaside town of Sunset Bird, California. Jamie lives with their mothers, Pamela and Noelani, and their older sister, Lizzie. As Jamie returns home one summer evening, they encounter a strange man. The man has a secret proposition: if Jamie befriends the man's son, he will give Jamie a twenty-dollar bill. The mysterious man turns out to be Mr. Holden, Jamie's new neighbor. After divorcing his wife, he has moved to Sunset Bird with his eight-year-old son, Cove. Little does Jamie know, Cove will become an important part of their life...

Our Life: Beginnings & Always is a wholesome visual novel created by GB Patch, and was released on November 16, 2020. It is the first installment in the Our Life series. The game follows the MC and Cove's relationship as it develops over the course of fifteen years. The gameplay is separated into four "steps" — Step 1 occurs when the MC and Cove are eight years-old, Step 2 occurs when they are thirteen, Step 3 happens at age eighteen, and Step 4 at twenty-three. Each step represents a single summer, and is divided into events called "moments." Within the moments, the MC makes decisions that shape both their and Cove's characters.

A second installment of the series, Our Life: Now & Forever

Our Life:Beginnings & Always contains examples of: