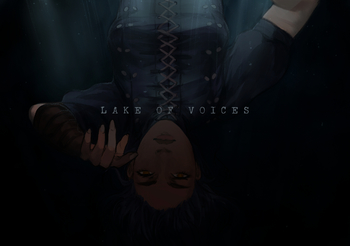 Kikka and Bemelle are assigned with a mission to help the people living in a village on the other side of the lake Sinnlos, where monsters referred to as 'Nixi' live, waiting for prey to come by and taking joy in drowning travelers. The maze-like bridge connecting the shores appears only at night and disappears at the first signs of dawn, although the two-day journey across is the shortest one. The only person that can help them navigate the dark with his light is the mysterious Guide...

. It features a branching narrative with many tough and impactful choices to make. The player, who is in control of Kikka's decisions, gets to determine, whom to sacrifice and what to do in order to survive. Certain choices are timed, so it's important to think and react fast, although staying silent is also an option that forwards the plot further.