Visual Novel / A Light In The Dark 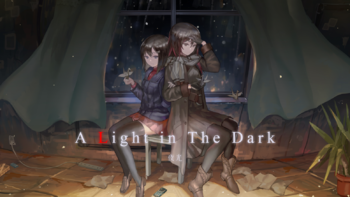 "We cannot choose in this unfair world."

A rich boy named Hao-Chen Jiang is tied in a dim and dreary room that he has not seen before. As soon as he opens his eyes, a mysterious girl appears before him, asking him for a ransom. It is at that moment he realizes that he has been kidnapped, and he needs to figure out how to escape from the captors.

A Light in the Dark is a visual novel game developed by CreSpirit, Storia and Narrator. It was released on Steam on 16th June 2018. An official novelization of the game was released on 11th July 2018, which provides additional information for the story.

The player takes control of Hao-Chen Jiang, the hostage who gets kidnapped by two girls. During his days of imprisonment, you will need to examine the items around the room to formulate a plan to escape from the kidnappers or learn more about them. You will also need to interact with the kidnappers by answering their questions through various time-limited options. You can build your trust with them, or sometimes, outright berate your kidnappers when necessary.

Can you help him escape from the kidnappers?

Not to be confused with A Light in the Darkness.