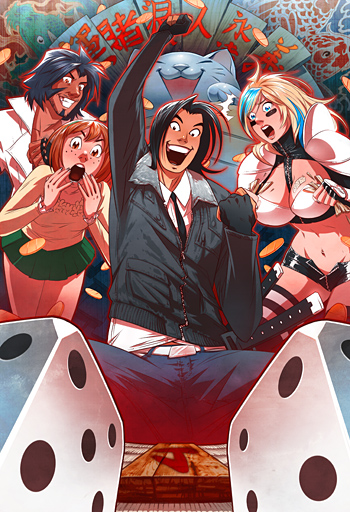 A typical day.
“In the distant future, humanity has ushered in a new feudal age. The solar system is ruled by massive corporations and their executive aristocracy. But amidst this new order is a universe filled with adventurers, outlaws, thrill seekers and treasure hunters looking to carve out their own legacy amongst the stars.”
Quote from Roningalaxy.com

Ronin Galaxy is an action-adventure webcomic that updated Monday, Wednesday and Friday. It has a manga appearance. Offline since 2017.

The story follows the main characters, Cecil Onimaru the samurai ronin and Giancarlo Baccari the gun-slinging mercenary who eventually pick up Taylor May, a plucky refugee from Earth. Along with their ship and robot cat-girl Ai, they embark on various mercenary adventures that end up being more trouble than they expect. Their adventures bring them to new and exotic places, saving damsels in distress whenever they can.