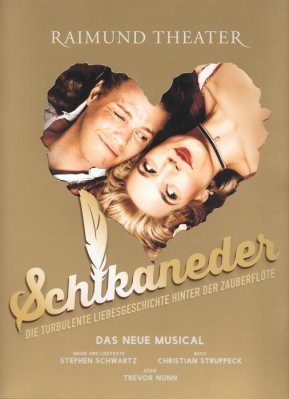 The turbulent love story behind The Magic Flute.
Advertisement:

Stephen Schwartz's second German-language musical, following The Hunchback of Notre Dame. It covers the relationship between Emanuel and Eleonore Schikaneder — the librettist for the Mozart musical The Magic Flute and his wife.

The show opens in the Theater auf der Wieden, to a dismayed company of actors on the verge of being expelled — because Eleonore Schikaneder, being a woman, cannot inherit the theater license from her deceased lover. While Eleonore is at wits' end, her best friend Barbara proposes inviting a "theatrical wizard", who happens to have a license.

He also happens to be still married to Eleonore.

Hearing this, the theatre owner flies into a rage, refusing to ever let Emanuel Schikaneder back into her life. Eventually, she calms down, and recounts to her troupe their story, back when she was "young and naive", so they could judge for themselves whether the company should enlist Schikaneder's aid.

Eleonore, Fraulein Arth at the time, was auditioning for Franz Moser's theatrical troupe when she met the dashing Joseph Schikaneder. To test her skills — against the company's whispers of Eleonore getting hired because her mother was a principal member of the company — Joseph runs the balcony scene from Romeo and Juliet with Eleonore. From that point on, sparks fly wildly between them. Despite his reputation as a ladies' man, Joseph cannot win over Eleonore's physical intimacy, and Eleonore nurtures feelings for him but denies it.

Out of the blue, Moser announces that he is retiring, and has ceded the troupe over to a Marinelli, who offered him six thousand guldens. Joseph boldly makes an offer of eight thousand, and it's taken up by Moser. The problem? He doesn't have that kind of money, his parents being indentured servants. After overhearing Moser explain to Eleonore that he decides to retire because he was devastated by his wife's death, Joseph takes up the courage to propose to Eleonore, who accepts, and encourages him to raise the money so he can fulfill his dream of owning a permanent theatre. At their wedding, the groom announces that he will change his name to something that harmonizes better with his bride's name: Emanuel. Together, they effectively become the first couple of Austrian theatre, with adoring crowds at the stage door every night.

However, trouble arrives. A timid writer, Johann Friedel, comes to the troupe in order to collaborate with the great Herr Schikaneder, but ends up staying on as an actor because of his developing infatuation for Frau Schikaneder. Eleonore, meanwhile, finds out that her husband is far from an ideal one: he is routinely unfaithful to her, but brushes it off as being mere entertainment. The last straw is when Maria Anna Miller, Emanuel's newest fling, excitedly (or, perhaps, brazenly) announces to her that she is carrying Emanuel's child, and so Emanuel will marry her. Devastated, Eleonore seeks solace with Johann, and convinces him to run away with her to open a permanent theatre — effectively stealing Emanuel's dream. Maria Anna breaks the news of her pregnancy and Eleonore's elopement to Emanuel, who firmly tells her that he will provide for her child, but he simply cannot marry her. Realizing that Eleonore was right, Maria Anna quits the troupe and moves away for a new beginning.

With the dream team broken up, Emanuel must struggle to keep his troupe together, and Eleonore, with Johann by her side, must take on the colossal task of raising a theatre all on their own.

The musical had its world premiere at the Raimund Theater in Vienna on September 30, 2016, and closed on June 21, 2017. A cast recording was released on December 5, 2016, featuring the original cast members: Mark Seibert as Emanuel Schikaneder, Milica Jovanovic as Eleonore Schikaneder, Franziska Schuster as Barbara Gerl, Katie Hall as Maria Anna Miller, Florian Peters as Johann Friedel, and the ensemble. An English-language production is reportedly in the works.