Music / Selling England by the Pound 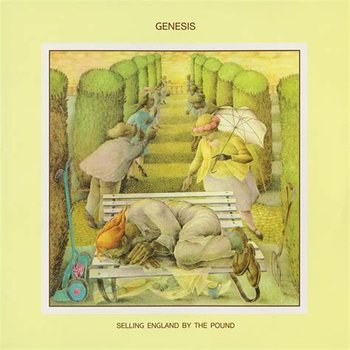 When the sun beats down, and I lie on the bench, I can always hear them talk.
"'Paper late!' cried a voice in the crowd
'Old man dies!' The note he left was signed 'Old Father Thames'
It seems he's drowned
Selling England by the pound"
— "Dancing With the Moonlit Knight"

Selling England by the Pound is the fifth studio album by Genesis, released in 1973. It was the first album by the band which charted a single in the UK ("I Know What I Like (In Your Wardrobe)", #21) and reached the US Billboard 200 (#70). Although a modest commercial success compared to the later works of both the band and its then-members Peter Gabriel and Phil Collins (it has likely sold around a million copies worldwide by now), its impact has extended far beyond its commercial performance; it remains not merely in all likelihood their most acclaimed album but one of the most acclaimed Progressive Rock albums of all time.

I knoooooooooow what I trope and I troooooooooope what I know: