Literature / The Lord of Opium 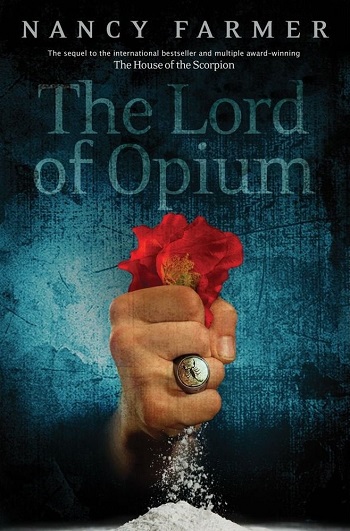 Released on September 3, 2013, The Lord of Opium is the sequel to Nancy Farmer's The House of the Scorpion and follows fourteen-year-old Matt's role as the new ruler of Opium. As clone of the deceased despot El Patron, Matt finds himself inheriting El Patron's empire, including its vast eejit army, but nonetheless finds himself powerless to put an end to the suffering he had witnessed. With external and internal enemies impeding his progress, Matt is unable to even smuggle Maria, his childhood love, back into Opium. Faced with opposition from rival drug cartels and his own doubt, Matt must confront these challenges and seek the means to revitalize the dying world around his nation.

Lord of Opium provides examples of: