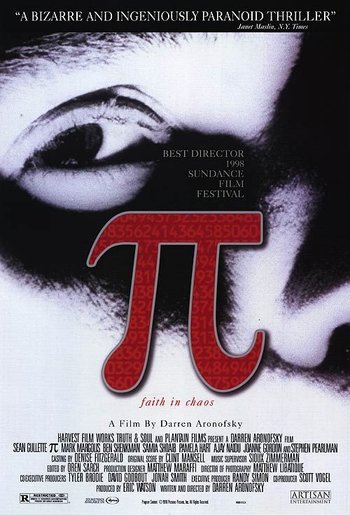 faith in chaos
When I was a little kid, my mother told me not to stare into the sun.
So once, when I was six, I did.
The doctors didn't know if my eyes would ever heal.
I was terrified. Alone in that darkness.
Slowly, daylight crept in through the bandages, and I could see.
But something else had changed inside me.
That day, I had my first headache.
— Opening monologue of Maximillian Cohen
Advertisement:

π (pronounced "pi") is a 1998 film that marked the directorial debut of Darren Aronofsky, who also wrote the film and co-created its story. Best described as a surrealist Psychological Thriller, the film was made for a mere $60,000 and won a number of awards including the 1998 Sundance Film Festival award for Best Director. In his first film score work, the movie's electronic soundtrack was assembled by Clint Mansell, a future long-time collaborator with Aronofsky, who contributed the frenetic drum-and-bass theme.

The film revolves around Maximillian "Max" Cohen, a reclusive, paranoid, migraine-afflicted math genius who, with his home-built supercomputer Euclid, has come to a series of unshakable truths:

1. Mathematics is the language of nature.
2. Everything around us can be represented and understood through numbers.
Advertisement:
3. If you graph these numbers, patterns emerge.
Therefore: There are patterns everywhere in nature.

Through his investigating, Max stumbles upon a 216-digit number that seems to hold some universal secret. As he continues his research, his headaches worsen, he begins experiencing vivid hallucinations, and he becomes the target of Wall Street firm agents interested in profiting from his work as well as a sect of Hasidic Jews who want him to help find patterns in the Torah. Though he pushes on, determined to puzzle out the number's meaning, his mind might not be ready to comprehend it.

Shot in minimalist, high-contrast black and white, the film is very atmospheric with relatively little dialogue, and also quite confusing, to an overall effect that is often compared to Eraserheadnote This is a comparison that Aronofsky doesn't personally fully agree with, as he stated in one interview