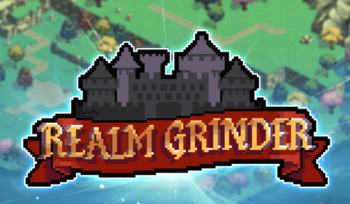 "Fancy being a benevolent king or a cruel tyrant? Choose an alignment between Good and Evil and form alliances with multiple races such as fairies, elves, angels, goblins, undead and demons in order to improve your coin output. Click to harvest your treasure, build your almighty empire, unleash your magic upon the land and be the richest ruler of the realm!"
Advertisement:

is an Idle Game created by Kongregate developer DivineGames

. The earliest version was released on May. 19, 2015 and has enjoyed a frequent number of updates since, the biggest of which have been referred to as "expansions".

In this game, you play as a nameless ruler of a kingdom in an unspecified location with a (not-so) simple goal - become the richest king/queen in the realm.The first person you see in the game is the Advisor. She serves as a tutorial of sorts, explaining various features to the player and offering tips in discovering new things.

The primary resource in Realm Grinder is Coins. They are used to buy more buildings and different types of upgrades. You gain more by clicking anywhere in the landscape. Eventually, clicking will become insufficient and your assistants will take care of most of the work for you.Occasionally, an assistant or click will produce a Faction Coin, the secondary resource. These are needed for negotiations with the multitude of races living among the Realm. But you can't form an alliance with any of them without choosing an Alignment first.

When you start, you can decide whether to be Good or turn Evil in order to attract the presence of the Factions. Each has a different set of playstyle influenced by its upgrades along with a "Faction Spell", a unique spell only that specific faction can cast by spending mana. Every race has its own strengths and weaknesses and it is of most interest to you to take advantage of the various spells to start exploring.

As you and your heirs rule through the eras, you will discover ancient civilizations, meet underground dwellers and much more through the eyes of your future selves.

A mobile version has been released. You can get it here