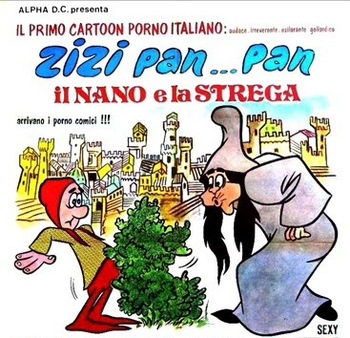 Set in what looks to be the Middle Ages, the story begins with Master Limpcock having trouble making love to his wife, Erotica. Little Dick, the well-endowed dwarf servant, witnesses the situation through a keyhole. Meanwhile, an old witch named Nymphomania is concocting a spell to regain her beauty, but her Crystal Ball makes a deal with her that she'll be able to break the curse after she has sixty-nine orgasms during intercourse. Little Dick and the witch cross paths when he is sent by his master to fetch her in order to make him a potion to cure his impotence. When she takes notice of the dwarf's enormous member, she has her way with him and then pursues him relentlessly when Little Dick refuses any more of her advances, thus beginning a chase between the two where Little Dick is forced to have random misadventures all over the kingdom.

Due to many instances of explicit sex and nudity, it goes without saying the film is Not Safe for Work.