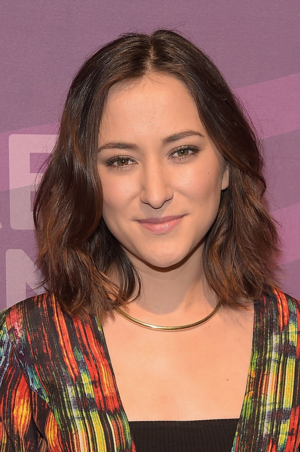 Zelda Rae Williams (born July 31, 1989 in New York City, New York) is an actress, and the daughter of Robin Williams — he named her after the eponymous Princess of The Legend of Zeldanote whom, in turn, is named by series creator Shigeru Miyamoto after the wife of famed writer F. Scott Fitzgerald, Zelda Sayre. On her mother Marsha's side she has Filipino ancestry.

She is most recognizable for her roles in commercials and as Kuvira in The Legend of Korra. She is also a self-professed video game nerd, with her favorite game being Super Smash Bros., even though she is an unofficial representative of LOZ (though on Super Smash Bros. Melee she always plays as Sheik, so it's less traitorous). Once when appearing at ComicCon for LOK, she snuck off to go and play Mario at the release stand of the new Nintendo handheld. She's also openly bisexual.

Zelda Williams and her works provide examples of: