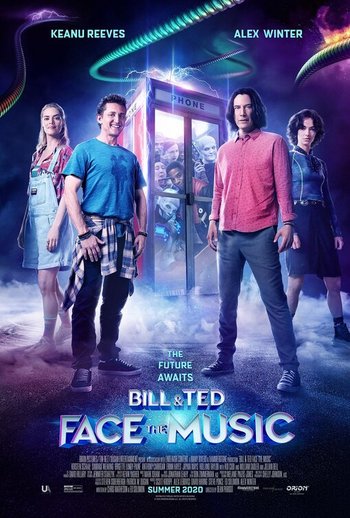 Bill & Ted Face the Music is a Sci-Fi comedy starring Keanu Reeves and Alex Winter. It is the long-awaited third film in the Bill & Ted franchise, coming 29 years after Bill & Ted's Bogus Journey. It was directed by Dean Parisot and written by franchise creators Chris Matheson and Ed Solomon.

Bill S. Preston, Esq., and Ted "Theodore" Logan are now middle-aged rockers who are well-past their glory days. And despite decades passing since their adventures through time and death, they still haven't written the song that will unite the world. This long-gestating task takes on new urgency when a visitor from the future comes and tells them that they need to write the song in the next 78 minutes.

The film was released in select theaters and on digital platforms on August 28th, 2020. Here are the most-triumphant

The movie has a comic book prequel called Bill And Ted Are Doomed set not long after Bogus Journey, it chronicles the boys' first attempt to unite the world by going on a World Tour, but things don't go as planned.