Series / You Bet Your Life 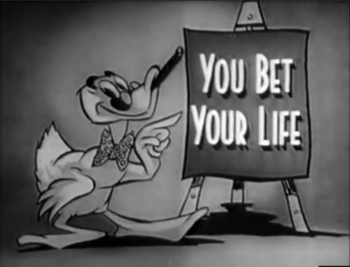 A comedy Game Show that ran on both radio (1947–60) and television (1950–61), You Bet Your Life was hosted by Groucho Marx, who established a solo career after the break-up of the Marx Brothers.

The idea for the show came from a guest spot Groucho did on Bob Hope's radio show. While waiting to come on stage, Groucho got so impatient waiting in the cold room that he furiously upstaged Hope with a stream of adlibbed wisecracks that Hope could barely keep up with.note Bob Hope has always been notorious among comedians for being completely reliant on his writers for jokes, although at least he was a step above "joke-stealers" like Milton Berle. The radio show's producer, John Guedel, later asked Groucho if he could do an improv show like that on command. Groucho confidently confirmed it, but initially balked at the idea of hosting a quiz show until the producer assured him that the real action would be conversations with the contestants. As it happened, Groucho just had a radio show cancelled and was concerned that his career was in trouble, so he agreed to try it out and never regretted that choice.

At the start of each show, the audience was informed of the night's Secret Word. If any contestant happened to say it while they were on the air, they won an extra $100. If the word was said, a stuffed duck with Groucho's signature glasses, bow tie, and cigar dropped from the ceiling with the $100 attached.

The quiz consisted of question-and-answer rounds in which contestants bet all or part of an initial purse on their ability to answer the questions in a chosen category. The questions weren't really that difficult, and the two members of a team were allowed to collaborate. The format itself changed over the years, though:

During the above period, teams that won a very negligible amount were asked an obvious-answer question for $25, such as "Who is buried in Grant's Tomb?" Amusingly, they got the money even if they were wrong!

But none of this was really the point of the show — it was really about Groucho interacting with interesting people while getting off whatever zingers he could.

Syndicated revivals starred Buddy Hackett (1980-81) and Bill Cosby (1992-93). There were also three unsold pilots with Richard Dawson (of Family Feud fame) in 1988 for NBC (the last two both produced by Carsey Werner). These had varying rules as well. Another revival for syndication debuted on September 13, 2021; Jay Leno hosts this time out, and this version includes elements from his tenure on The Tonight Show, such as Kevin Eubanks returning as his bandleader and sidekick, and segments such as Headlines. It was renewed for a season 2 that December...a mile marker both previous revivals failed to cross.