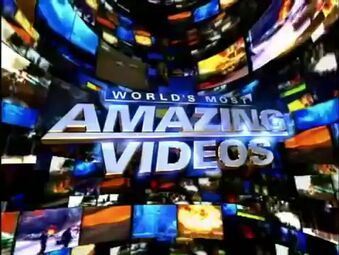 Tonight, on The World's Most Amazing Videos...
These are the incredible true-life stories of people who faced their most desperate hour, and lived to tell about it. Everything you are about to see is real - real people, real danger, real excitement. Get ready to experience the thrill of a lifetime. You are about to witness... The World's Most Amazing Videos.
— Introduction
Advertisement:

World's Most Amazing Videos is a program, initially broadcast on NBC and later on Spike TV, that showcases accidents, disasters, and other extraordinary events captured on camera. It is similar in content to shows like Real TV and Maximum Exposure, but employs a more serious tone. Seasons 1-4 are narrated by Stacy Keach, while the fifth season is narrated by Erik Thompson, with Don LaFontaine serving as announcer in the opening, closing, and interstitial segments. The first four seasons feature multiple random clips in each episode, while the fifth has episodes focusing on a particular theme.

The World's Most Amazing Tropes: