Series / Wisdom of the Crowd 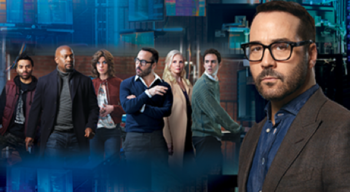 Wisdom of the Crowd is an American drama television series (based on the Israeli series of the same name by Shira Hadad and Dror Mishani). It premiered on CBS October 1, 2017 and ended on January 14, 2018. The series was produced by CBS Television Studios and Universal Television.

Driven by a need to solve his daughter's mysterious murder, Silicon Valley tech innovator Jeffrey Tanner takes crowdsourcing to a new level. After selling off his shares in the search engine giant AllSourcer to raise capital, he creates a digital platform called "Sophe" that allows people around the world to publicly share and evaluate evidence for criminal investigations. The software forms the basis of a new company with a staff of passionate specialists — including the Detective Tommy Cavanaugh, the original police officer who searched for his daughter's killer; Tariq Bakari, a genius hacker whose issues with authority put him at odds with the law; Sara Morton, a brilliant engineer who followed Jeffrey from AllSourcer to Sophe for reasons that aren't strictly professional; and Josh Novak, the technically-minded head programmer.

Concerned with Tanner's obsession is his successful ex-wife, Congresswoman Alex Hale, with whom he shares an unbreakable bond over their shared grief. As Tanner taps into the "wisdom of the crowd" to dig up new clues, his unexpected success fuels his determination to solve even more cases than just the one that's personal to him.

Tropes Present in Wisdom of the Crowd: