WARNING! THIS PAGE ASSUMES YOU ARE FAMILIAR WITH Fate/stay night [Unlimited Blade Works] AND Fate/Zero! AS SUCH, IT WILL CONTAIN UNMARKED SPOILERS FOR BOTH SERIES. YOU'VE BEEN WARNED! 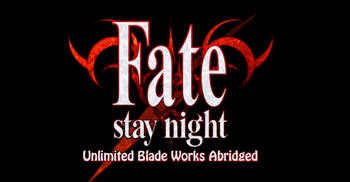 "I WANT THAT!"
Archer: Let's get something straight: You have no wish.
Rin: Correct.
Archer: You think I'm Satan.
Rin: Actually Satan. The "Actually" is important, I think.
Archer: And you would win this war with me, "Actually Satan", leaving the ability to make any wish I want in my hands regardless of what I, "Actually Satan", might want to do with that kind of power?
Rin: Totes.
Archer:...Fuck it, I'm in! I'm all about that zero accountability life!
Rin: Cool.
Archer: I humbly swear, my master, that together, you and I are going to fuck up all the bitches.
Advertisement:

Featuring tons of Mythology Gags to both the spoilery parts of UBW, as well to the prequel Zero. Also notable for containing several Abridged Series stars, most notably being YamatoSFX in the role of Shirou, most famous for his role as Kirito in the insanely popular Sword Art Online Abridged.

The series follows Ax-Crazy Tsundere Rin Tohsaka, her Deadpan Snarker Straight Man of a servant Archer (Actually Satan, at least according to Rin), wannabe hero Shirou Emiya, and his emotionally scarred, perpetually angry servant Saber, as they participate in the Fifth Holy Grail War. If they don't wind up killing each other first.

Berserker and Ilya perish after a hopeless struggle against Gilgamesh - but not before Berserker shatters Gil's "unbreakable" chains and gives him the scare of a lifetime.

Berserker and Ilya perish after a hopeless struggle against Gilgamesh - but not before Berserker shatters Gil's "unbreakable" chains and gives him the scare of a lifetime.