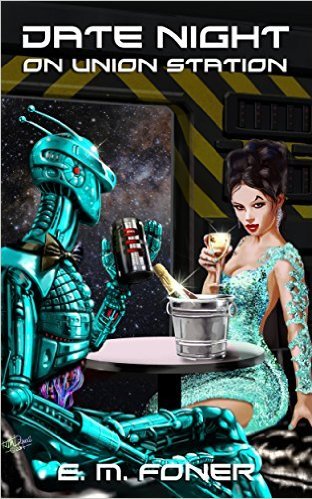 series by EM Foner is a series of e-books on Amazon's Kindle platform that are essentially a Government Procedural Work Com IN SPACE!
Advertisement:

A couple decades after First Contact with a Proud Merchant Race of benign Artificial Intelligences called the Stryx, humanity has exploded onto the galactic stage... as a backwater species struggling to reconcile its old system of capitalistic nation-states with a universe that prefers to barter goods and services and where nobody pays the nation-states much attention. Now Kelly Frank, a functionary at the EarthCent consulate on Union Station, struggles to pay her rent on a civil servant's salary while dealing with clashing alien cultures, collectives of school children buying starships with mining rights they don't own, video games that become internationally Serious Business, and a mother who wants grandchildren and calls collect every week to nag her about it. And then, to cap it off, her office manager's daughters get her a gift subscription to a new dating service run by the Stryx themselves.

Elsewhere on the station, former mercenary Joe McAllister now works as a salvage operator. In between raising his adopted son, chasing down ships that skipped out on their bills, and trying to figure out just what the heck half of the junk in his shop left to him by the former owner is, he's paid for a job in trade with a partially used gift subscription to the dating service.

E.M. Foner wrote Date Night on Union Station to deal with writer's block in the middle of work on a more conventional sci-fi epic, but he unexpectedly ended up with a Sleeper Hit and was convinced to write sequels.