Video Game / Guardians of the Galaxy: The Telltale Series 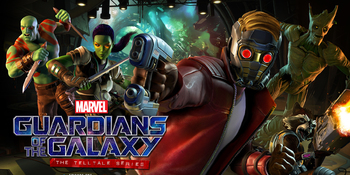 Everybody was dancing in the moonlight...
Advertisement:

Guardians of the Galaxy: The Telltale Series is an episodic adventure game by Telltale Games, based on the Marvel Comics franchise of the same name. While not part of the Marvel Cinematic Universe, it clearly takes its major inspiration from that version of the team.

Originally announced as an unnamed collaboration between Marvel and Telltale in 2015, the project was officially confirmed in December 2016 through a teaser trailer aired at The Games Awards. Like most other Telltale games, it consists of five episodes total, released monthly.

While jamming out to his usual tunes, Peter Quill, A.K.A. Star-Lord, receives a distress call from the Nova Corps, who inform him that they've just been attacked by the Mad Titan himself, Thanos, who's out to find a rare and mysterious artifact known as the Eternity Forge. Taking up the offer in exchange for a clean slate, Star-Lord rounds up the rest of the Guardians (Gamora, Drax, Groot, and Rocket Racoon) and heads off to take down the fearsome foe once and for all.

Guardians of the Galaxy: The Telltale Series contains examples of the following tropes: