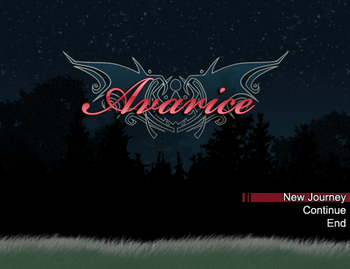 There is a saying where I come from: "there's no more dangerous place to be than between a man and something he wants." Today, my friend, I am that man, and you are in that place.

Avarice is a non-linear freeware Action RPG for PC, made in RPG Maker VX by Anaryu, Solitayre, and Krisanna in 2009. The game was based on the idea of "opposite forces", in this case, magic and technology. It is rather short, (only three dungeons) but the gameplay and storyline are both polished and engaging. It is available here

The plot centers around Lexi, a tech-savvy Action Girl, and Vandeli, an arrogant mage with loose morals. The duo goes through three different dungeons to deal with mages (that were previously Vandeli's allies) that have been causing trouble.

Not to be confused with the Deadly Sin, which is under Greed.