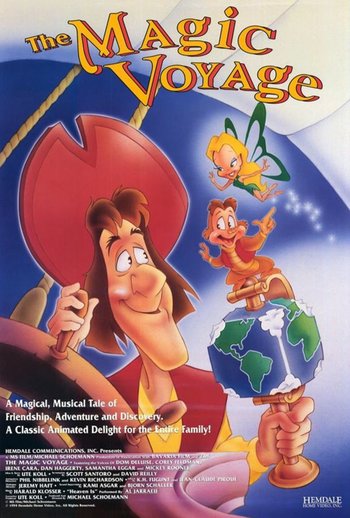 You remember that part in history class when these guys helped Christopher Columbus out in his travels...right?
A long time ago, people thought the world was flat, and if you sailed uncharted waters, you might just fall over the edge into space. Now this may seem strange to us now, but in those days, no one knew what lay over the far horizon. But with pirates and hurricanes and sea monsters to contend with, it was a very dangerous voyage. But in 1492, there appeared an Italian navigator, a man with a revolutionary idea: He thought the world was... square. And his name was... Christopher Columbus.
— The opening narration for the movie
Advertisement:

The Magic Voyage (originally Die Abenteuer von Pico und Columbus or "The Adventures of Pico and Columbus") is a 1992 animated feature from Germany that is... loosely based off the voyages of Christopher Columbus. You know, the sailor who wanted to prove the world was round — not find an easier trade route from Europe to Asia, which is surely a far harder concept for children to grasp.

are bugs, not worms, rescue his girlfriend. His girlfriend is a Fairy Princess from a Magical Land on the moon, and she was stolen away by an evil swarm of bugs. The Swarm brought her to the new world, where Columbus and the worm finally find her held captive in an Aztec-looking pyramid full of honey. Columbus destroys the evil Swarm, and the native people celebrate his ridding their home of the terrible evil. Columbus and his bug friend sail back home with visions of big cities and shopping malls dancing in their heads.

Surely, you remember all of this from your grade-school history lessons?

Basically, this is the movie that makes Titanic: The Legend Goes On look perfectly reasonable in comparison.

The Magic Voyage provides examples of: