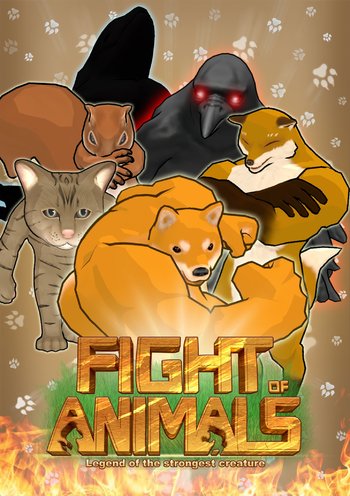 Fight Of Animals: Legend of the Strongest Creature is a Fighting Game by Digital Crafter, who are also known for Fight of Gods.

The game's cast is based on viral misleading photos of animals.

The characters are (links show the image that the character is based on):

The game has a simplified control scheme, similar to Fantasy Strike, with only four buttons: Light attack, Heavy Attack, Overhead/Special Attack, and Burst/Super. Special attacks are done like in Super Smash Bros., by pressing the Special button and a direction. However, there is potential for long combos to appeal to more hardcore fighting game fans.

, was released in December of 2020. This game is a proper Platform Fighter allowing up to four players at once both offline and online with rollback. It also introduces the characters Kung Fu Dachshund and Fluffy Sheep (who were later added to the main game in a free update).

This game provides the following tropes