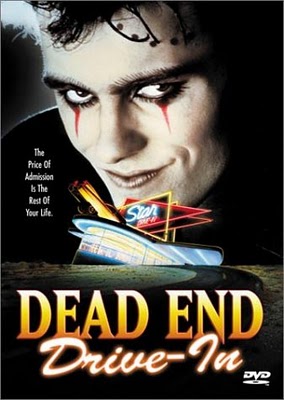 When the show’s over, there’s no way out.
"There's a party every day, a movie every night, and all the junk food you can eat. What more can a kid want... except to get out."
Advertisement:

Dead End Drive-In is a 1986 Australian B action/sci-fi film directed by Brian Trenchard-Smith (who also did BMX Bandits, Leprechaun 4: In Space, The Man from Hong Kong and Turkey Shoot).

It is 20 Minutes into the Future in 1995 and Australia has stagnated to a state roughly akin to that in the first Mad Max movie, with dingy slums covered in graffiti and gangs of marauding "car boys" scraping by via stealing car parts. Crabs (Ned Manning) is a teenager who is an avid jogger. He convinces his older brother Frank to lend him his '56 Chevy for a date with his girlfriend Carmen (Natalie McCurry). The two go to a Drive-In Theater where they're playing Brian Trenchard-Smith's own other movies and start to make out... only for the car's wheels to get stolen. The theater's attendant refuses to do anything until morning, so the two are forced to stay at the drive-in overnight. Come said morning, Crabs finds the place alive and resembling a ghetto. He goes to the attendant, only to be informed that he, Carmen and 190 more of society's teen delinquents are to be imprisoned at the drive-in by the government until further notice. Whereas all the other kids, including Carmen herself, seem all too content to remain at the drive-in forever placated by the limitless supply of junk food and violent movies, Crabs ain't, and he starts scheming to escape...