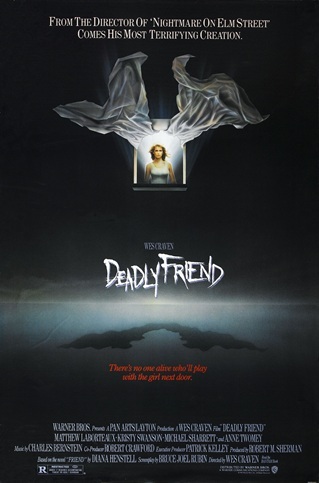 Deadly Friend is a 1986 sci-fi/horror film directed by Wes Craven, based on the novel Friend by Diana Henstell.

Teen Genius college professor Paul moves into a new neighborhood with his mom and his sentient robot B.B. and soon meets Girl Next Door Samantha (Kristy Swanson) and her abusive father. Things start out great and the kids have a good time, but it's not long before a series of tragedies occur: B.B. is destroyed by the paranoid elderly neighbor lady after they pull a prank on her; Samantha is killed by her father in a drunken rage; Paul decides to bring Samantha back to life by use of a brain transplant using B.B.'s computer chip brain, but the transplant makes her more robot than human and things go downhill from there.