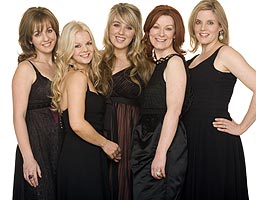 Celtic Woman is an all-female, New Age/Celtic/Contemporary Classical singing group. Created by music director David Downes, the ensemble blends the girl-group concept of hit groups like the Spice Girls and Celtic artists like Enya with some of the elements of Michael Flatley's Lord of the Dance tour. Their repertoire ranges from Celtic tunes like "Mo Ghile Mear" and "Nil Se'n La" to modern standards like "You Raise Me Up" and "When You Believe."

Originally supposed to be just a one-off concert at the Helix Theatre in Dublin in 2004, the group decided to remain together and start touring globally due to the groups popularity overseas, especially in the United States. In fact, the group wrote a song called O, America

to thank the United States for all the love and support.

The group has released 17 albums, sold over ten million albums worldwide and consistently charts at or near the top of the World Music chart. Their albums have also set records for length of time at the number one spot; in fact, their first album was only knocked to second place after over a year by their subsequent album "A Christmas Celebration."

The line-up has varied across the years, as members have left and others have replaced them. Overall, there have been 17 different members; 15 vocalists and 2 violinists.