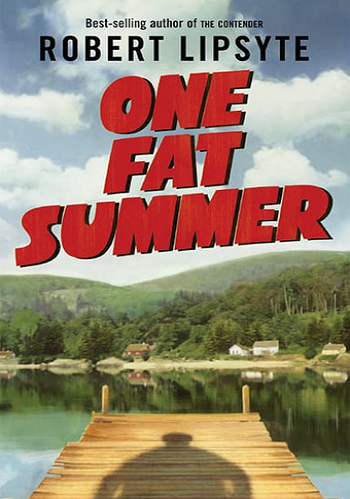 A teen drama novel written in 1977 by Robert Lipsyte, who also wrote The Contender.
Advertisement:

A summer at a beautiful spot like Rumson Lake might sound like a wonderful vacation for some, but for Bobby Marks, who can't even button his jeans or look over his belly to touch his toes, it is nothing but pure torture.

And this summer is already proving to be worse than most. His parents won't seem to stop fighting, and his best friend Joanie is apparently returning to New York City without telling him why. Worse, since this torpedoes his original plans for summer, his father insists he get a job or be shipped off to summer camp.

Stuck working as a "lawn manager" for Dr. Kahn, a stingy real estate owner determined to work the boy to death before he makes a dime, Bobby soon finds he has another problem. The local teen who had the job last summer is lurking around every corner, just waiting to get Bobby alone and pay him back for stealing the job.

But there is more to Bobby than his 200 lbs. girth. He's about to find out just how terrifying and exhilarating, how dangerous and wonderful, one fat summer can be.

Was adapted in May 2018 into a motion picture called "Measure of a Man" staring Blake Cooper and Donald Sutherland.