Literature / One Of Us Is Lying 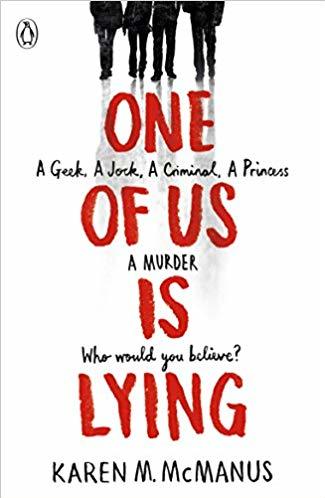 "Anyway, they bring it on themselves. If people didn't lie and cheat, I'd be out of business."
— Simon, fifteen minutes before being murdered.
Advertisement:

A jock. A brain. A criminal. A princess. Five students enter detention: four leave alive. One of Us is Lying is a 2017 Young Adult novel by Karen M. McManus that asks, what happens when The Breakfast Club ends with a murder?

Sports star Cooper only knows what he's doing in the baseball diamond.

Bad boy Nate is one misstep away from a life of crime.

Prom queen Addy is holding together the cracks in her perfect life.

And outsider Simon, creator of the notorious gossip app at Bayview High, won't ever talk about any of them again. He dies 24 hours before he could post their deepest secrets online. Investigators conclude it's no accident. All of them are suspects.

A sequel to One of Us is Lying, One of Us is Next, followed in January 2020 and concerned Bronwyn's sister Maeve, and a deadly game of truth or dare.

In 2020, it was announced that the book would be adapted into a series for NBCU streamer Peacock, which premiered in 2021.

"Everyone's got something to hide, right?"
— Nate