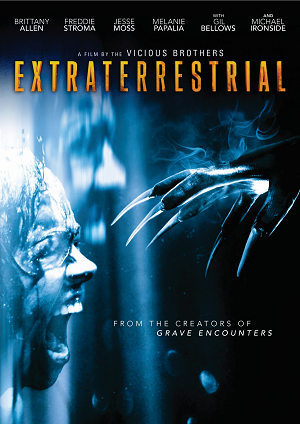 April has a problem. She thought she was going to her family cabin in Echo Lake with her boyfriend Kyle for a quiet, romantic weekend before the cabin is sold. The problem is, Kyle invited his friend Seth, Seth's girlfriend Lex, and Lex's friend Melanie to come with them and party. It will be difficult enough for April to get the real estate pictures taken before the cabin is sold without three hangers-on to deal with.

Sheriff Murphy has a problem. Echo Lake has been subject to a series of troubling phenomena, including disappearances, vandalism, and animal mutilations of late. He doesn't want to have to deal with yet another carload of stupid kids visiting the area and thinking they can do whatever they like.

When a alien spacecraft crashes in the woods outside the cabin occupied by April and her friends, their weekend of partying is going to become a nightmare for everybody concerned...

Not to be confused with the Spanish film Extraterrestre or the Speculative Documentary Extraterrestrial (2005).