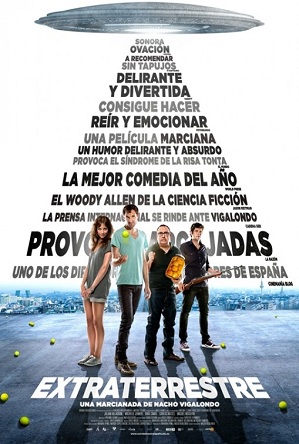 Extraterrestre (or in English markets Extraterrestrial), is a 2011 Spanish Dramedy.
Advertisement:

Julio wakes up in an apartment in Cantabria, Spain with no memory of what happened the night before. He finds a beautiful woman, Julia, in the kitchen making coffee and offers to leave. As he is getting ready to go the two notice there is no traffic in the streets and quickly notice an Ominous Floating Spaceship over the city. Eventually Julia's neighbor Angel comes over to check on her, and then things are complicated when her boyfriend Carlos arrives.